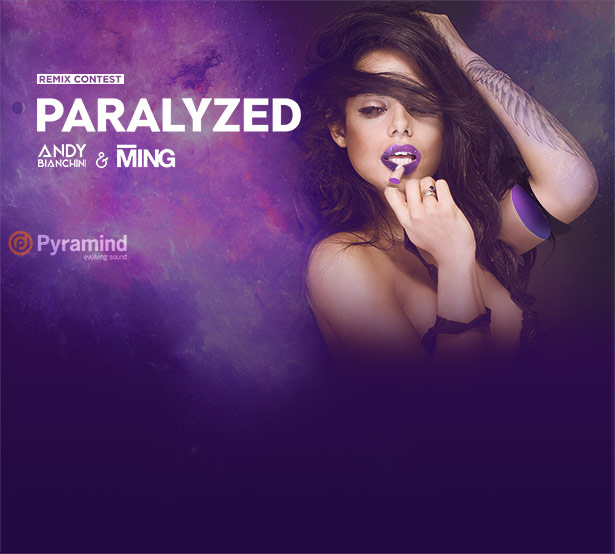 Pyramind proudly presents their latest remix opportunity for the Indaba Music community! This time you have the chance to reimagine a supremely catchy track by producers Andy Bianchini and MING.

Andy Bianchini is a young DJ and producer of 23 years old born in the wonderful city of Rio de Janeiro. He has been in the market for more than 6 years surprising with his born talent. Andy entered the field of music production and fell in love with House, Electro and Future, trying to merge the characteristics of these great genres of e-music into his tracks!

Andy had his tracks played by the world's top DJs such as Martin Garrix, Tiesto, Afrojack, Don Diablo, Nicky Romero, Fedde Le Grand, Laidback Luke, Jay Hardway and several other big names in the electronic world scene. As an example of his success, his track "Puzzles" reached more than 5.5 million plays in Spotify in 1 year!

Andy was also responsible for producing official remixes for renowned artists such as Arno Cost, Inpetto, Going Deeper, Carol Lee, and many others! But he does not stop there! The young DJ already had his tracks added by Garrix and Tiesto in their official playlists on Spotify! Andy has already done works for labels like SONY, Mixmash, Kontor, Enhanced, Black Hole, among others.

In 2017, Andy Bianchini comes with news. One of them is his new track, released 4 months ago, which already got more than half a million plays in Spotify. The carioca DJ has renewed himself with this new challenge, showing even more his versatility as a producer. The track is part of a new proposal of his project, aiming to reach more of the Pop and Chill music audience. But of course, without losing the Uplifting and Futuristic sound characteristics, which are hallmarks him. "High Hopes" still features the vocals and composition of the Belgian artist, Yves Paquet, making it even more special.

The other new feature of the year is his newest track, "Gotta Know," released in June by Enhanced. This track promises and it is already with almost 30 thousand plays in Spotify in such a short time. The track has futuristic and chill beats at the same time make it a unique one.


When it comes to change, you either get on board or get left behind. No one knows this more than MING. Flipping the script is second nature to this New Yorker. In a city with an ever-changing soundscape, MING remains versatile and adept: essentially a way of life for the producer, songwriter, remixer, DJ, and musician. In the mid-90s, he was one-half of the pioneering electronic duo MING+FS. Playing guitar, bass, keyboard, and turntables, MING toured the world and gave international audiences an introduction to electronic music, opening up for acts like Sting, RUN-DMC, and Moby.

Over the last decade, MING has pulled the studio more into focus, while still keeping a hand in the touring life. He remixed singles for a star-studded lineup including Beyoncé, Lady Gaga, Katy Perry, Ellie Goulding, and Black Eyed Peas. His original tracks climbed the charts, scoring four Top 40 trap remixes on Beatport. Collaborations on singles like “Disintegration” from Le Castle Vania for deadmau5’s Mau5trap label and “King Kong” for Steve Aoki’s Dim Mak Recordsstaked claim on dancefloors worldwide. MING received a Grammy nomination in 2014 for the remix of Crossfingers’ “Falling Out” (featuring Danny Losito). No doubt you’ve heard MING at the club or festival, but his work continues to percolate elsewhere. Habitat Music—MING’s music production company—supplies original music to the advertising, film, and television industries. Some of his work has been featured on TV shows such as CBS’s “CSI: Miami” and “CSI: NY,” HBO’s “Sex and the City,” and Showtime’s “Weeds.” Brands like Sears, Nissan, Chevy, Burger King, Nokia, AT&T and Doritos have also leveraged MING’s cutting-edge sound for their global advertising campaigns.

MING continues to break through in 2016: MING Presents Warmth, which will solely focus on house music, can be heard on Dash Radio, the Main Stage channel of dl.fm, and Future.fm and his mixes now appear on Music Choice, America’s premier music and video on demand provider. Each month, listeners will hear new releases and remixes on the Hood Famous Music label, plus club dates updated on the regular. Expect a lot of exciting news in 2017 from MING. Make sure you keep up!

Now is your chance to create a remix for Andy Bianchini and MING's track "Paralyzed". Show use what you've got!

Check out their socials below: